Where did the love go for our boy Mattias Ohlund? The local media is in full flight towing the Canuck line on Mattias. "he was too expensive" "He's too old" "it was time for him to move on".

Have we, as Canuck fans, no regard for our legacy players? Mattias has been erased from our collective memories yet an explanation has never been given why.

I would propose that Willie Mitchell is no better than Ohlund. Mitchell is the same age, as mobile and equally defensive minded as Ohlund.

The differences?
-Mitchell is a BC boy. This is huge. locals have a way of playing large for the home team, not to mention they get huge love from the fans. See Brendan Morrison's Canuck tenure for proof.

-Mitchell is cheaper. Big willie style's cap hit is $250k less than Matty's. Does 10 years service and 2 under valued contracts deserve a lousy $250k? I would say yes.

-Mitchell is good in the room. This is anecdotal but possible. Ohlund was of another era but was he so bad for this team that we should discard the backbone of the defense?
Posted by Goad 1 comment:

When the Canucks made GM Place their home, they were bad. Although there was a ton of optimism surrounding the team, the potential never came to fruition. The team store had to sell something and no one was going to buy a Lonny Bohonos jersey. Throughout the late 90's one could find obscure replica and authentic jerseys from every team in he NHL.

As the team slogged toward respectability and Trev returned, the store started carrying more and more name and number Canucks sweaters. A fan could saunter in and pick up a Cassels or Baron jersey without waiting 4-6 weeks. Still, the store held the biggest names on the biggest sellers. A Sundin blueleaf or Bondra screaming eagle were still readily available. The orca still ruled though and there were no other Canucks incarnations allowed in corporate sellout place.

Then came the knit, away (blue) retro stick in rink.Killer jersey. I bought one for my buddy for Christmas and was jealous every time he wore it. This retro opened the door for discussion on the Canuck colours (again) and test marketed the eventual change. With the league trying a retro look in some markets (Calgary opted for the 'burning horse head') and Nike's marketing guru Chris Zimmerman coming on board the Canucks threw their marketing juggernaught into full gear. Within a couple of seasons of the lockout and an RBK jersey takeover later, gone was the burgundy and silver.In it's place was a sea of blue and green dotted with islands of "flying V's" and "plates of spagetti". There are few, if any teams in the NHL that have made as many wholesale colour scheme changes as the Canucks. Finally though, they were using this to their advantage, selling the popular blue scheme (including the ever popular stick in rink 3rd) while marketing the others as kitchy, retro alternatives. 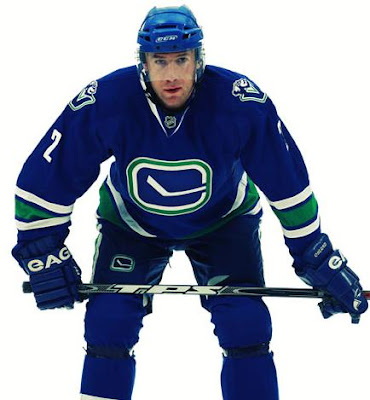 All of this seems great for the Canucks. They have a steady revenue stream and successful marketing scheme that is raking it in. Herein lies the problem. Gone are any traces of the rest of the league. Even team Canada is banished from the racks. God forbid you are an out of town (enemy) fan and want to pick up a Cal Clutterbuck or Mark Giordano jersey. No chance. Not only are the Canucks losing out on a valuable source of revenue but the fans are losing out on seeing all those beautiful jerseys (no, not yours cowtown). It creates an insular fanbase that knows nothing of the league, only the Canult (TM).
Posted by Goad 1 comment: 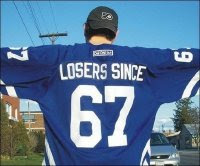 The going concern of Canadian hockey is and always will be...the maple leafs. Toronto controls our media and money so it should come as no surprise. I am not here to rehash these facts. I simply ask the question "Why are their fans such dickwads?"

I recently went to my first leaf game. Don't get me wrong, I have seen the leafs play more times than I would care to remember. After all, one has only to turn to channel 3 on any Saturday from October to March to be assaulted by their particular brand of mediocrity. No, this was my first LIVE leaf game and to say it was a leaf game is a bit of a misnomer. It was in fact a Canuck game versus the worst team in the NHL. The leafs.

The leafs have been near the bottom of the pack for 4 seasons now. Missing the playoffs, but never being low enough in the standings to acquire a blue chip prospect. They have cleaned house in both management and coaching. They have professed a commitment to rebuilding while trading away top draft picks for unproven talent, finally opening the door for true failure. Even the faithful CBC has revisited its unwavering support due to the unwatchable embarrassment on the ice.

So what's with the attitude? I can respect fans sticking with their team through the lean times. Hell I'm a Canuck fan. That's what we do. But these guys (and gals) are just loudmouth pricks! Is it just a case of over-compensation? Are leaf fans the short guy in the Ford F450 with the huge mudders and truck-nuts? Are they the fat girl with the sarcastic jibes that wears all black, attacking so they don't get hurt? Or are they just too stupid to know anything different?

I attended the game with my wife and 6 month old girl and I must admit it gave me a very different perspective on the afternoon's events. Had I not had my family in tow, I would have fully engaged in verbal jousting with the idiotic eastern throng, but having your daughter strapped to your chest has a way of calming you. I smiled in disbelief at the number of ignorant but vocal leaf fans amongst the Canuck faithful. It wasn't until an altercation in the beer lineup that my blood truly began to boil.

Being a fully attended game (sell out means nothing anymore) the concourse was packed between periods. Most everyone was courteous and respectful of the baby strapped to my chest but it was several leaf fans that bumped into me, shouted in my daughters face and scared her into bawling her eyes out. Some fat bitch actually asked me if I wanted to fight her after I told her to "watch the baby" as she steamrolled through the lines. Rude, obnoxious, self righteous, loud mouth pricks.

I, as a hockey fan and Canadian, refuse to discuss the leafs anymore. They are irrelevant. They do not deserve our love or hate. They deserve only disdain and indifference and their fans deserve even less.
Posted by Goad No comments:

After hearing some valid anti Canuck fan sentiments I had a moment of clarity in my otherwise Canuckcentric brain.

Ya this one is from Hit the Post too.

"I agree that Canucks fans are some of the worst fans in professional sports but this douchebaggery is a relatively recent phenomenon.

Canucks fans were a cautious, jaded, and wary animal that had been given scant reason for hope. Why would we be boastful? Our team played in East Van, wore Halloween costumes for jerseys and trotted out line after line of has-beens and ne'erwill-be's.

Where the new breed of Cocknuck came from is anyone's guess. The team certainly didn't get that much better. I believe it was a combination of the new building downtown, an influx of easterners, the corporate takeover of the stands, and the overwhelming media barrage spewing propaganda.

Whatever the cause, the effect has been a contingent of overbearing, fickle fans with an unbelievable sense of entitlement."
Posted by Goad No comments:

As Originally posted on Hit the Post (Yes I'm just going to steal my responses to other blogs as I'm too lazy to write new ones) in response to flames fans bashing the Canucks.

"Why are you bothering to discuss a Canuck/Blackhawk game? What do you care?

I understand you're all knowledgeable hockey fans that love to discuss the minutiae of our beloved game, but the Canucks posts seem strangely out of context. And yes, I'm paying attention.

What's the fascination? Are we your Toronto? Why do you bother?

I guess my point is, if the roles were reversed. If the Canucks were a Stanley Cup Champion and the Flames were a long standing pathetic under-achiever, I can't imagine Canucks fans giving two squirts what the flamers did on a nightly basis.

On The Canucks tip (sorry, I'm watchin' Snoop dog on the Strombo show) I'm on the fence. As you may or may not know I'm a psychotic Ohlund fan so this season starts out dissapointing in my book. It's hard not to point to his absence after every goal.

Our goaltender is running hot and cold and I hate to say it but I would accept consistency over flashes of brilliance at this point.

The D is undermanned at the moment but that was inevitable if not predictable. Soft and slow anyone?

The moneyball approach personifies the Johnny forwards. Projects are the name of the game, bringing mixed results. Samuelsson seems like the real deal, Kessler continues his rise to second line center status and Rypien... don't lie, you wish he was a bic.

Bernier, Raymond, Wellwood, Hordichuck, Grabner and Johnson? Would you want them on your team?

There could be an upside to these boys. Who knows, they could come together in an historic run, defying the odds, culminating in Vancouver's first Stanley Cup victory in 85 years. Buuuut probably not.

Take the high road flamin' C. It'll look good on you."
Posted by Goad No comments: